Leonardo da Vinci Was the Father of the Bearing!? The amazing history of bearings

It is believed that the reason humankind first evolved to walk bipedally was so our hands would be free to carry objects more effectively.
It would surely be no exaggeration to say that the desire to manipulate objects freely has been carried by humankind down through the ages and is a fundamental characteristic of humankind.

So, last time we explained how bearings serve the function of reducing friction and allowing objects to move more smoothly (that is to say, freely).
But when was it that bearings came to be, and how did they evolve and spread out over the earth?

In this part, we will introduce you to the amazing history of bearings. 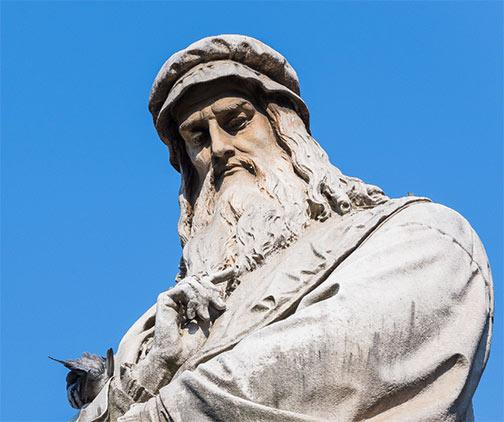 The Leonardo statue in the Piazza della Scala in Milan

1. What? Bearings were first used in the ancient world?

Since ancient times humankind has developed multiple ways of reducing friction. For now let's just look at the example of the building of the pyramids of Egypt.

The pyramids were built by standing huge, heavy stones one atop the other. The tremendous size of these rocks is astonishing: how on earth did the ancients move such heavy stones? The answer can be guessed at by examining ancient Egyptian wall paintings.

There are a number of wall paintings that depict the pyramid construction, and among those we can see logs being rolled underneath the massive stones. Scholars believe that by rolling these logs, friction was reduced, allowing for a relatively small amount of force to move these extremely heavy stones.

This method of transporting stones gave way to the idea that led to the rolling elements (rollers) that are used in bearings. 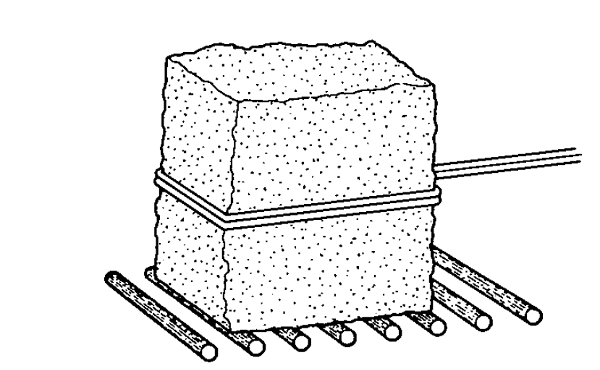 A device wherein friction is reduced by rolling logs

The records of humankind reducing friction down through the ages differ by time period and method used, but can nevertheless be seen all over the world. This is a testament to just how important reduction of friction to allow for smoother movement has been throughout human history.

2. So, wait ... Leonardo da Vinci was the one who first thought of using bearings with cages?

Leonardo da Vinci was a brilliant artist from Italy, and one of the archetypal "Renaissance men". It would not be an overstatement to call him the "father" of the modern bearing.

Leonardo was incredibly passionate and curious about everything, and left a massive impression not just on the art world but also on the field of mechanical design. In one of his notebooks can be found a sketch of a bearing, in indispensable component of machinery.

This unparalleled ingenuity is what gave birth to the bearings that greatly reduce friction.

The structure is that of two rings (races), above and below, and rolling balls (rolling elements) stuck between the rings. Astonishingly, this sketch even includes a "cage" so that the balls do not come in contact with each other.

This is nearly identical to the structure of the bearings we continue to use today.

This "basic bearing structure" of races, rolling elements (a "ball" or a "roller") and a cage was thought up around 500 years ago. It was because of the genius of the Renaissance man Leonardo that bearings were able to achieve this monumental leap forward.

But even if he was able to discover this basic bearing structure, actually building and mass producing such a device was another matter.

For bearings to become widely used in machinery, we would have to wait for the Industrial Revolution.

3. The spread of bearings took place from the Industrial Revolution on

The Industrial Revolution lasted roughly from the mid-18th century through the 19th century. Steel was produced in large quantities, and this allowed for high-strength steel bearings to be mass-produced for the first time. This meant that bearings could be utilized in a wide variety of industrial fields.

Axles using bearings were one particularly important discovery of the industrial age.

The appearance of the bearing-based axle allowed for a tremendous leap forward in transportation and movement.

At around the same time, bearings started to be used in all variety of industrial machinery, contributing greatly to industrialization.

Over the course of the Industrial Revolution, bearings, working ever in the shadows to assist the development of industry, became a presence that humankind would be unable to live without.

4. The history of bearings in Japan

It is said that the first bearing to be made in Japan was produced in 1916 to meet an order from the Imperial Navy.

With Japanese domestic demand for bicycles steadily growing, and cars making their appearance, it seemed that the Japanese bearing industry would advance and spread steadily. The future looked bright.

But then World War II happened. Tremendous war damage was done to factories all over Japan, and the bearing industry suffered a significant blow.

But Japan's bearing manufacturers refused to give in. We all pulled together, and were able to develop a manufacturing process for high-quality bearings. The precision and performance of bearings made in Japan were able not only to recover but to become greater than ever before.

With increased motorization, more and more bearings designed to improve the durability and reliability of cars continued to be developed, resulting in a massive boom in Japan's domestic demand for bearings. Bearings played a key role in Japan's miraculous economic growth in this era.

Ultimately the precision and performance of Japanese bearings was recognized around the world, allowing for us to enter the international market. Now, with Japanese bearings renowned the world over, around 30% of all bearings on planet Earth are the work of Japan's bearing manufacturers.

Had bearings not been developed, humankind would probably still today be trying to exert massive force in order to move heavy objects, to say nothing of how we would almost certainly not have all the modern conveniences and comforts provided by machines.

The birth and evolution of bearings had an immeasurably large impact on the development of human civilization.

Bearings are an artifact of the ingenuity of our ancient ancestors, and played a key, if hidden, role in the history of industrialization.

What are the principles on bearings operate to reduce friction? And what is the basic bearing structure?

Be sure to read Part 3 to find out!

Part 1: What Are Bearings? Let's learn about the basic functions of bearings! Part 2: Leonardo da Vinci Was the Father of the Bearing!? The amazing history of bearings Part 3: What's the Structure of the Bearing? The role of the structure and parts in reducing friction Part 4: What Are the Differences Between Bearings? The various types and special features of bearings Part 5: The Applications of Bearings I: This is how bearings are used in cars Part 6: The Applications of Bearings II: This is how bearings are used for machines in industry Part 7: Bearings Made Using Advanced Materials and Lubricants: Bearings all around you

Bearing Trivia 2nd series - How to Select the Right Bearing

Back number
Categories
Contact Us
Return to top of page