What's the Structure of the Bearing? The role of the structure and parts in reducing friction

Bearings make the rotation of objects smooth.
Do you know just how they cause smooth rotation?

In this part, we will introduce you to the structure and the various components that make up the bearing. 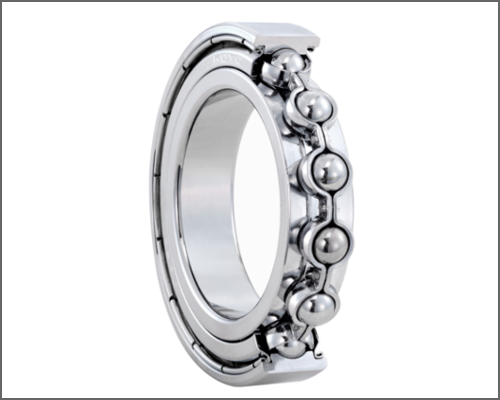 1. The principle of bearings

In Part 1 we explained how it is necessary to reduce friction in order to allow for smooth rotation.

What Are Bearings? Let's learn about the basic functions of bearings!

But just how do they reduce friction?

Bearings reduce friction by means of a rolling motion

In Part 2 we explained how the history of bearings began by using rolling logs to allow for the movement of extremely heavy stones.
Figure 1 shows how the "shaft" rotates, causing the rolling elements ("balls" or "rollers") inside the bearing to roll.Bearings reduce friction by means of this rolling motion.

Fig. 1: The structures of a rolling bearing and a plain bearing

The "rolling bearing", with its rolling motion, reduces friction more than the "plain bearing" with its sliding motion, allowing for a greater decrease in the amount of energy consumption during rotation.

So what kind of structure to bearings have? Let's take a closer look.

2. The structure of bearings

Modern bearings come in a wide variety of types, but their basic structure is almost identical to that thought up around 500 years ago by Leonardo da Vinci.

Leonardo da Vinci Was the Father of the Bearing!? The amazing history of bearings

The components that make up the bearing are as follows:

Cage ... The component that maintains a fixed gap so the rolling elements don't contact with each other 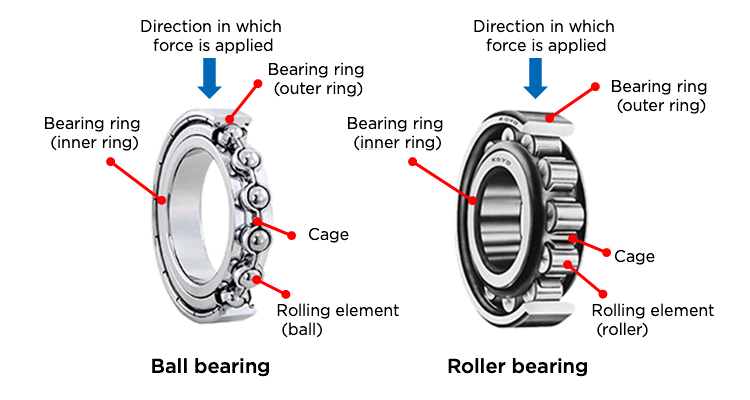 Fig. 2: The structures of radial bearings

Bearing rings are used for these radial bearings.

The bearing ring on the inside, into which the shaft is inserted, is called the inner ring.
The one on the outside is called the outer ring, and is inserted into the housing* (as seen in Figure 3).

"Housing" refers to the components which come in contact with the outer ring when the bearing is inserted. 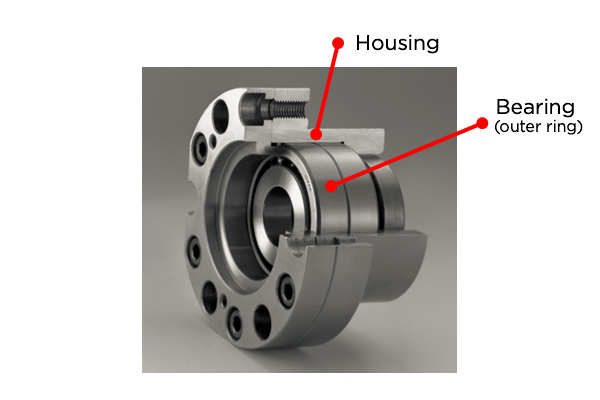 Reference: Please click here for more detailed information on the design of the shaft and housing

Figure 4 shows two bearings, called "thrust bearings", which support a force applied in the same direction as the shaft.
Races are used for these thrust bearings.

Fig. 4: The structures of thrust bearings

The surfaces of bearing rings (races) on which the rolling elements roll are made to be extremely smooth, to allow for smooth bearing rotation.

Table 1 shows the "balls" and "rollers" used as rolling elements.

There are a variety of different rolling elements designed to suit the specific conditions of the bearings, such as the strength of the supporting force or the speed of the rotation.

We will explain in Part 4 about the types of bearings, but if you are interested, please check out the link below.

Reference: Bearing Knowledge - Selecting the Type of the Bearing

Fig. 5: Rolling motion of rolling elements with no cage present

In order to prevent this, a cage is put in place to keep the rolling elements separated from each other. This allows them to roll smoothly.

There are a variety of different types of cage designed to suit the specific conditions of the bearing, such as the strength of the supporting force or the speed of the rotation.

Figure 6 shows the two most common types of cage

Fig. 6: The two most common types of cage

In this way, bearing rings (races), rolling elements and cages all play a role in allowing bearings to function, and it is by combining these functions that bearings can rotate smoothly.

The bearing would be unable to continually rotate stably and smoothly, however, with just these various components.
We need now to introduce one more very important component of bearings.

Have you ever had a plate covered with oil slip out of your hand when you held it? You probably all understand that when there is oil between two surfaces the amount of friction is decreased.

Bearings aim for stable and smooth rotation, and to do that the friction with rolling motion needs to be reduced and the abrasion of the various components needs to be prevented. This is the job of the "lubricant".

Semi-solid (i.e., like cream) "grease" and liquid "lubricating oil" are both widely used as bearing lubricants.
The lubricant also serves to remove the heat that is generated inside the bearing as it rotates, serving to increase the service life of the bearing.
For this reason lubricant is an important component in allowing bearings to rotate stably and smoothly.

Reference: Please click here for more detailed information on the methods and purposes of lubricating

Conclusion: The various components and lubricant that allow the bearing to rotate stably and smoothly

Bearing rings (races), rolling elements and cages all play a role in allowing bearings to function, and it is by combining these functions that bearings rotate smoothly.

On top of these components, lubricant also helps to reduce friction in the rolling motion, preventing abrasion.

In this way, each component of the bearing serves an important function, allowing the bearing to continually rotate stably and smoothly.

What types of bearings are there, and what kind of special features do they have?
Be sure to read Part 4 to find out!

Part 1: What Are Bearings? Let's learn about the basic functions of bearings! Part 2: Leonardo da Vinci Was the Father of the Bearing!? The amazing history of bearings Part 3: What's the Structure of the Bearing? The role of the structure and parts in reducing friction Part 4: What Are the Differences Between Bearings? The various types and special features of bearings Part 5: The Applications of Bearings I: This is how bearings are used in cars Part 6: The Applications of Bearings II: This is how bearings are used for machines in industry Part 7: Bearings Made Using Advanced Materials and Lubricants: Bearings all around you

Bearing Trivia 2nd series - How to Select the Right Bearing

Back number
Categories
Contact Us
Return to top of page