Excessive static load or impact load even at very low rotation causes partial permanent deformation of the rolling element and raceway contacting surfaces. This permanent deformation increases with the load; if it exceeds a certain limit, smooth rotation will be hindered.
The basic static load rating is the static load which responds to the calculated contact stress shown below, at the contact center between the raceway and rolling elements which receive the maximum load.

The total extent of contact stress-caused permanent deformation on surfaces of rolling elements and raceway will be approximately 0.000 1 times greater than the rolling element diameter.

The static equivalent load is a theoretical load calculated such that, during rotation at very low speed or when bearings are stationary, the same contact stress as that imposed under actual loading condition is generated at the contact center between raceway and rolling element to which the maximum load is applied.
For radial bearings, radial load passing through the bearing center is used for the calculation; for thrust bearings, axial load in a direction along the bearing axis is used.

The static equivalent load can be calculated using the following equations.

The greater value obtained by the following two equations is used. 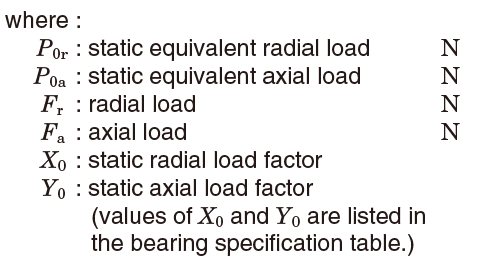 The allowable static equivalent load for a bearing is determined by the basic static load rating of the bearing; however, bearing service life, which is affected by permanent deformation, differs in accordance with the performance required of the bearing and operating conditions.
Therefore, a safety coefficient is designated, based on empirical data, so as to ensure safety in relation to basic static load rating.